Two universities, those in Bern and St. Gall, were said to have filed criminal complaints against the entities that serve as intermediaries between students and their ghostwriters. It might seem surprising that the denial over this phenomenon, which has been completely transparent since the advent of the Internet, is causing such an uproar today.

Using the services of a ghostwriter to write a master’s or PhD thesis falls within the scope of plagiarism because the students attribute writings to themselves that are not their own in order to be awarded degrees. In terms of its consequences, it is indeed a fraud on the system. But what are the reasons behind its growth?

• Economically, ghostwriting businesses are expanding because of supply and demand. As student demand for these services increases, businesses provide more of them. These fee-based services exist in all countries and in all languages. Here are examples in French (Expert Mémoire), in English (Author Bridge Media) and in German (Acad Write).

• Legally, the institutions that file complaints against these businesses have little chance of winning. Legal proceedings take so long that a business would have plenty of time to make a lot of money before the trial could even begin. And on what grounds could such a case be won? Could the institutions claim that the businesses tempt the students by distributing promotional flyers? The response would be that the Web in its entirety is a temptation! Turning to the legal system to resolve this problem would amount to admitting that our academic system has failed.

• Financially, ghostwriting services aren’t just for rich students. Interns who are offered permanent positions, with corresponding salaries, might be tempted to resort to such services. They might wonder why they should spend every evening for months on end writing a thesis that they now just see as an oppressive final burden when they could rid themselves of that chore for a reasonable price (which varies between EUR 5,000 and 20,000, depending on the type and level of the thesis).

• Strategically, the market for ghostwriting services is so well developed that the companies that provide them now operate according to several business models. Under one model, the sites pay students pro rata for the papers they put up for sale based on the number of times the papers are purchased. Under another model, the sites offer to draft original papers on the topics requested by their student customers and charge per page.

• Commercially, some are pragmatic (i.e., how much students pay depends on the quality they want), while others are more collaborative and offer advice to those who ask for it. Some offer differentiated services that are tailored to the weaknesses of the person requesting the service (for example, carrying out analyses or reviewing the literature). Customers then just have to find the deal that best suits their philosophy.

• Pedagogically, let us remember that in Ancient Greece the pedagogue was the slave who taking students to their headmasters. Being responsible does not mean waiting until the end of a semester or until a PhD dissertation defense to evaluate a paper and decide what grade it should get or determine whether there was cheating that needs to be punished. Our mission is to interact with our students in order to guide them in carrying out personal projects that are also edifying. Being responsible means questioning our own methods of supervising and training students in light of the knowledge society that we all aspire to.

• Humoristically, we have noted that these sites claim to have certain ethical standards vis-à-vis their customers, as illustrated by the guarantee that appears on the French site Expert Mémoire. It assures students that their papers will be the original work of the experts who write them, that they will include thorough bibliographic references, and that they will be free from plagiarism. The students are also guaranteed complete confidentiality. 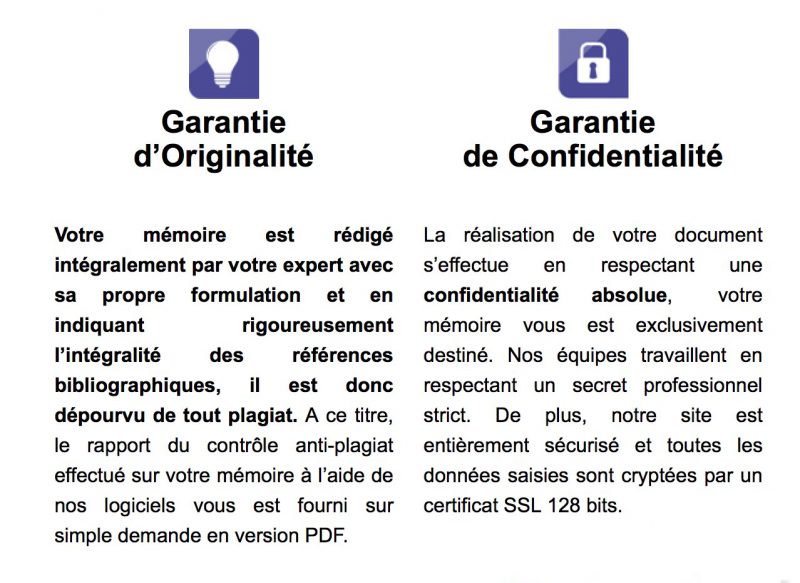