We are conducting a survey of doctoral study directions. This study will enable the heads of doctoral schools, ombudsmen and integrity referents in academic institutions to compare their practices with those of other similar institutions.

The data collection will be carried out from January to June 2020 from our samples in France, Switzerland, Montenegro/Kosovo, Spain/Portugal, Romania and Canada. The results will be presented at the International Colloquium for Research and Action on Academic Integrity in Coimbra, on 30 and 31 October 2020, which will bring together actors involved in the development of integrity policies and who have taken an active part in carrying out these surveys.

This interim report was written on the basis of a floating analysis of the first thirty questionnaires filled in on 227 Directors of Doctoral Schools solicited. By the Directors of Doctoral Schools in France, during the pre-test period of the questionnaire. As these are qualitative analyses, the in-depth examination of thirty detailed responses (13.2% of respondents) is already sufficient to carry out a floating analysis, but of course not to propose a structuring of the field, a social representation of the concept of integrity in doctoral schools, nor profiles by geographical zones.

The questionnaire will be disseminated more widely during the months of March to June 2020 and will allow a comparison of practices by geographical zones. The results will be presented at the Coimbra Conference to be held on 30-31 October 2020.

A first general observation is the low level of interest in our study among the majority of the people we personally contacted. A response rate of 13.2% is low for people in programme management positions.

This may, in the long run, raise the question of whether the function to which managers are assigned is not in itself a devalued function because it is exercised in a context of rapid rotation which does not allow them to be agents of action and change . A kind of institutional façade, as one respondent suggests: “institutions are, in a certain way, obliged to assume it without, however, giving it the necessary means to contribute to the development of an institutional culture based on integrity”.

On the other hand, a few, on the contrary, were passionate about the questions we asked, which allowed them to “think” in a “new” way. Although in this questionnaire we ask for short answers, the reflective power of the respondents opens up important avenues for discussion.

When we delve deeper into the underlying reasons for the lack of interest when we asked them directly (via Skype or at our conferences), two hypotheses emerge

Thus a very wide variance in the sensitivity of directors of doctoral studies or doctoral schools is emerging. For some of them, integrity is not the core of their profession, and they say that they “have texts on the subject”. For others, on the other hand, there is debate in committee, reflection, the setting up of systems and innovation in this area.

We illustrate our analysis here with verbatim reports from significant respondents of the induced dimensions.

None of the respondents in our sample – despite being very involved and responding at length to our questions – seems able to impose the view that knowledge delinquency behaviours take root during doctoral studies and then no longer vary[1].

Paradoxically, everyone is aware of a certain crisis of publication, of the impact of article retractions and false knowledge. Sometimes excused by the pervasive “publish or perish” rule and institutional rankings.

According to the figure below, when a breach of integrity occurs and translates into a crisis within their unit or organisation, the vast majority of the directors interviewed are confined to steps 1 to 4 of the functional arrangements. As they do not have a history of the situations, very few of them try to analyse the causes (step 5) and reassess the arrangements (step 6).

None of the respondents in the sample is in the logic of inductive understanding and does not apply a precautionary principle, thus weakening academic responsibility. This is undoubtedly the reason why there are real offenders of knowledge, well-known personalities whose lack of academic integrity then makes journalists look good. 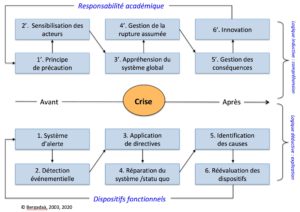